The New York Times  .....the Continuo Arts Symphonic Chorus sits (or stands) and sings, as if indeed participating in a Mass. Its members wear monks’ robes and hold books, looking very ecclesiastical as they chant forth those “Kyrie eleisons” and “dies iraes.” (They sound marvelous, too: One of the signal pleasures of the show is the rich choral singing.)

Hollywood Reporter ...."Menken's uncommonly complex, classically-influenced score often soars, thanks in no small part to the production's incorporation of a local choir, the 32-member Continuo Arts Symphonic Chorus, to augment the large ensemble."

Ashbury Park Press....Each performance of the Paper Mill production also boasts 32 local voices in the Westfield-based Continuo Arts Symphonic Chorus. "To hear them singing this music every night," Scott Schwartz said, "is one of the top attractions of the show."

NJ Star Ledger "... Menken's score takes on dark, lush qualities suited to the Gothic cathedral, amplified by an onstage choir (the strong local Continuo Arts Symphonic Chorus) and an ensemble of churchgoers who narrate."
"... The chorus interjects dramatic scenes with stabbing repetitions of "Dies Irae" and other Latin phrases that mostly work well."

Huffington Post    ..."The show boasts truly excellent singing from its four leads, huge vocal support from the Continuo Arts Symphonic Chorus that certainly adds punch to the show's many, many climactic moments ...Those who are musically inclined will appreciate the complexity of the score, the motifs for characters that are repeated throughout and the Latin choral work drawing on classic religious melodies for the act two curtain raiser."

Times Square Chronicles
..."The orchestrations by Michael Starobin are heavenly even if there is one to many Kýrie Eléison and Continuo Arts Symphonic Chorus supplies a divine celestial choir."

North Jersey...."Scott Schwartz and his team have a 32-piece choir (featuring members of the Westfield-based Continuo Arts Symphonic Chorus) stay onstage throughout the show; their rich sound helps transport audience members to another realm. "

NJ Arts Maven...."The effect is heightened by the addition of the Continuo Arts Symphonic Chorus, who chant hymn-like passages from their perch on platforms placed above the acting space. "
"It is a splendid piece of musical theater that is worth every penny of the ticket you buy."

The Westfield Leader in Vatican City 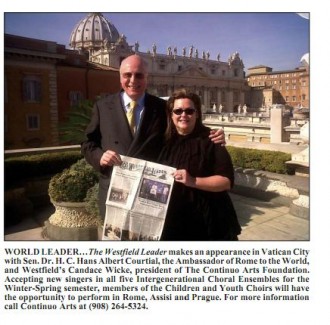 
WESTFIELD, NJ - Music lovers and supporters will celebrate at the third annual “Making Musical Dreams Come True” Gala, celebrating a successful three years of bringing music to our communities and around the world. Gala guests will enjoy an elegant evening of entertainment, dinner and silent auction.

During its brief history since becoming a 501(c)3 organization in 2007, Candace Wicke has brought Continuo Arts to the attention of both the local and international music scenes. Under her baton, Continuo Arts singers premiered Stephen Edward’s Requiem for my Mother at Carnegie Hall, and its European premiere and world-wide television broadcast with the City of Prague Philharmonic at the prestigious Festival Internazionale di Musica Sacre Series in Rome, Italy. Continuing accomplishments include the Continuo Arts Treble Choruses presenting the “Sounds of Music” series in Carnegie Hall, Continuo Arts Children’s Chorus performing with international superstar Andre Rieu, Carmen Monarcha and the Johann Strauss Orchestra at Boardwalk Hall in Atlantic City, and in the Spring, the choruses travelled to Rome to perform at the first Festival Internationale Di Arte Per Giovani Musicisti, conducted by Dr. Candace Wicke, artistic director of the Continuo Arts Ensembles.

Continuo Arts began season rehearsals for its intergenerational choral programs in September with a community open house and sing-in at its new home, the Historic Twin Maples Estate, 214 Springfield Ave. in Summit. Chorus members from ages six to past sixty experience a truly stellar world of music, and singers wishing to join are encouraged to contact the Continuo Arts Foundation. . Seniors Sing!, a light-hearted choral program for senior citizens, a collaboration with Summit Community Programs, is an example of our outreach to the community. According to Candace Wicke, “an important aspect of the Continuo Arts mission is the inclusion of our communities and bringing people into the arts. As a foundation, we give to our communities first.”


The Continuo Arts Foundation’s Seniors Sing! ensemble raised holiday spirits at Overlook Medical Center on Wednesday afternoon. Around 50 of the group’s 70 ‘young-at-heart’ singers belted out a host of holiday songs such as Happy Holidays, Just One of Those Things, and Frosty the Snowman.

“I think that you can see by everyone’s faces that we all live singing,” said singer Lyle Brehm of Summit. “It’s an opportunity in our towns for senior citizens to come out and sing.” “This is part of a big initiative with arts and well being,” said singer Paula Long from Westfield. “I love it,” said Elanor Bartsch of Union. “I have been singing all my life.”

Seniors Sing! members rehearse at 11:00 a.m. on Wednesdays at the Summit Recreation Center. The group was founded in January and is presented in collaboration with Summit Community Programs and supported in part by the Summit Area Public Foundation, Overlook Medical Center, a H.E.A.R.T Grant, and the Manley-Winser Foundation. "This group is really great," Bomgaars said. Since January, the group has sung at many events including the Lord and Taylor’s Do Good Charity event in Westfield and AARP.

On December 11th, Seniors Sing! will hold a concert for the Continuo Arts Foundation’s third annual “Christmas Time in the City” at the Presbyterian Church of Westfield. The concert begins at 6 p.m. and is presented free of charge as a gift to local communities, families and friends.

The free program will take place at the hospital located at 99 Beauvoir Ave. in Summit. Seniors Sing! will also be held at Sage Eldercare, 290 Broad St. in Summit, on Dec. 13 at 10 a.m.

The chorus is sponsored by Continuo Arts Foundation and Summit Community Programs.


The Continuo Arts Foundation presents the first “Home for the Holidays” home tour in Westfield on December 3rd from 10:00 a.m. to 3:00 p.m. Sponsored by the Coldwell Banker Residential Brokerage offices in Westfield and Maplewood, this festive new event will feature beautiful homes dressed in holiday style, musical entertainment and much more!

Serving as tour chairperson is Coldwell Banker’s Sherrie Natko, Monica Bergen is the tour historian and Coldwell Banker agents will serve as docents; sharing each home’s historic and unique qualities with tour goers. Ticket sales begin in November and will be available at Coldwell Banker offices in addition to other local merchants; look for the red “Home for the Holidays” poster. Advanced tickets are $30-$35 if purchased at the door.

Benefiting the Continuo Arts Foundation, proceeds will go to support the Foundation’s scholarship fund, young artist debut series, community service projects, and performances. Home tour ticket holders will also enjoy reserved seating at the annual “Christmas Time in the City” concert on December 11th at the Presbyterian Church of Westfield. In keeping with tradition, alumni performers of the past will be invited once again to participate in this year’s concert which will also feature five choral ensembles, soloists, instrumentalists, narrators, special guest artists, and of course, the ever popular audience sing-a-longs!

The Foundation’s intergenerational choral program also includes Seniors Sing!, a light-hearted choral program offered free of charge for senior citizens which meets from 11 until noon on Wednesdays at the Summit Community Center.

Most recently, the Continuo children’s chorus and teen singers, including the Oak Knoll School Ensemble were featured performers in the Festival Internazionale Di Arte Per Giovani Musicisti in Rome, conducted by Ruby Robertson-Knox and Candace Wicke. It was the first international youth-oriented event designed to promote and present the great artists of tomorrow by featuring the world’s finest youth choirs, orchestras, and directors.

Continuo Arts members will have the opportunity to perform in the next Festival which will include performances in Rome, Vatican City, Assisi and Prague featuring a world premiere ‘Missa Brevis’ composed by Stephen James Edwards.

The Continuo Arts Foundation offers opportunities for singers and musicians of all ages from six to past sixty, locally and around the world. Founded in 2007 by Candace Wicke, The Continuo Arts Foundation and Choruses have already made a mark on the international artistic scene in such notable venues as Carnegie Hall, Vatican City and Prague, in addition to local concerts and appearances. Singers in the Continuo Arts ensembles have presented three world premieres of major compositions for chorus & orchestra, been filmed for a documentary and recorded the cd release of “Requiem for My Mother.”

Future opportunities include: the “Sounds of Music Series,” the “Christmas Time in the City” series, both locally and in Carnegie Hall, as well as the world-wide broadcast concert event that has been 2,000 years in the making; “Live from St. Peter’s Square” the first professional concert to ever be held in St. Peters Square, Vatican City, Italy in 2012. Maestra Wicke has also been invited to be the North American conductor for the Bayreuth Festival in 2013.


The Continuo Arts Foundation kicks off its spring 2011 season with its presentation of “The Sounds of Music” series at Saint James the Apostle Church in Springfield on Saturday, June 11 at 7:30 pm.

Comprised of over 150 singers from across Union, Essex, Somerset and Morris Counties, the group will showcase music from different composers, genres and time periods, including Stephen Edward’s “Revelation Trilogy” to a Rogers & Hammerstein medley of favorites.

Among the artists featured in the performance is 15-year-old Summit pianist Samantha Donohue. A Young Artist Debut Winner, Ms. Donahue was selected from outstanding musicians from across the country and Canada to make her debut at the first Festival Internazionale Di Arte Per Giovani Musicisti in Rome last March, and has emerged as a rising star at competitions presented by The National Music Educator’s Association, the Piano Teacher’s Society of America, and the Florence Boughton Competition. She will perform Chopin’s Impromtu No. 4 Opus 66. Also featured will be soloists Catharine Layton and Brett Algaier, accompanied by John Conte. Candace Wicke is the Conductor.

The Continuo Arts Foundation, founded in 2007, has garnered the attention of the tri-state area and the international music world. Premiering works in Carnegie Hall and Vatican City, the Continuo Arts Foundation connects artists to opportunities locally and around the world. In addition, local programs include a three-week intensive Summer Musical Theater Conservatory that runs from July 5th to July 22nd ending in fully staged, costumed and choreographed productions of “Beauty & the Beast” and “Aladdin."

Sponsored in part by the Provident Bank Foundation and the Manley Winser Foundation, the “Sounds of Music” series is a free concert and open to the public; donations will be accepted at the door.

For questions regarding the “The Sounds of Music” series, the June 11 Saint James the Apostle Performance, auditions or further information, visit www.continuoarts.com, the Continuo Arts Foundation page on Facebook, or call the Continuo Arts Foundation at (908) 264-5324 begin_of_the_skype_highlighting            (908) 264-5324      end_of_the_skype_highlighting.