The Continuo Arts Foundation collaborates with the finest artistic organizations around the world presenting artists on 1st tier, world-class stages. Working with the likes of The Vienna Philharmonic, Prague Philharmonic, Roma Sinfionetta, Sistine Chapel Choir, Signature Conductors, Composers and Choral Ensembles, Continuo Arts is committed to procreating the arts through performance and composition on the pinnacle of the creative forefront and highest artistic standard.

ITALY UNLOCKED! A Musical, Cultural & Arts Experience for the Ages!

Join The Continuo Arts Symphonic Chorus for the Performance Tour of a Lifetime!

International Festival of the Aegean 2019

The International Festival of the Aegean, July 2019 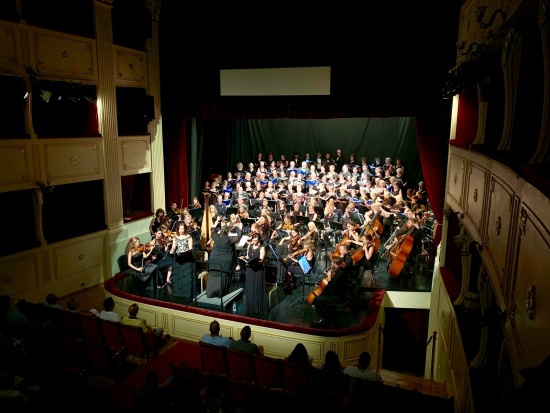 Continuo Arts Symphonic Chorus with the Pan European Philharmonic performing at the Apollo Theater in Syros, Greece for the International Festival of the Aegean.

Invitations:
Each year several outstanding conductors are invited to attend the prestigious Festival Pro Musica E Arte Sacra as guests of the Fondazione Pro Musica and The Continuo Arts Foundation.  Witnessing first hand one of the world's finest music festivals, the goal is to expose non-European musicians and organizations to this 1st tier artistic venue.  Previous guests have included:

The presentation of the Continuo Art Foundation's Inaugural Concert in 2008 on the Festival Pro Musica e Arte Sacra began an on-going collaboration with the Fondazione. (Visit our Performance Archives page for more information on our Inaugural Concert)  Through this collaboration, the Giovani Musicisti Festival for young musicians began in 2011.

The presentation of the Continuo Art Foundation's Inaugural Concert in 2008 on the Festival Pro Musica e Arte Sacra began an on-going collaboration with the Fondazione. (Visit our Performance Archives page for more information on our Inaugural Concert)  Through this collaboration, the Giovani Musicisti Festival for young musicians began in 2011.

The Performance of a Lifetime!  Concerto Cappella Sistina & Idyllic Ireland 2014 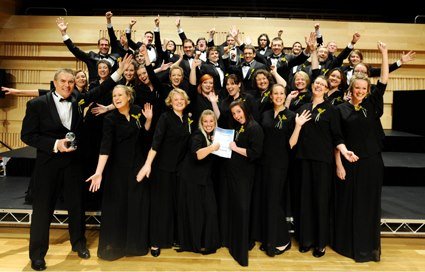 ECHOLOGY, The University of Newcastle Chamber Choir under the direction of Dr. Philip Matthias, will represent all of Australia on the prestigious Festival Pro Musica E Arte Sacra; a professional festival presenting only the finest musical ensembles from around the world.  Sharing the stage with the likes of the Vienna Philharmonic, the Cologne Dome Choir and GÜrzenich Orchestra,  the Sistene Chapel Choir and the IlluminArt Philharmonic Orchestra and Chorus from Japan, ECHOLOGY will present a program of selections by Stravinsky, Berkeley and Petrassi in addition to Australian composers Butterley, Stanhope and Donovan.  According to Candace Wicke, President of The Continuo Arts Foundation, “For many years, Dr. Matthias and the choral program at The University of Newcastle have been on the cutting edge of outstanding musicianship, programming and concertizing.  In collaboration with the Fondazione Pro Musica in Rome, the Continuo Arts Foundation is pleased to issue this well-deserved invitation to ECHOLOGY and Dr. Matthias to perform on this world-class stage.”

The Festival Pro Musica E Arte Sacra is widely regarded as one of the most prestigious music festivals in the world.  With roots stretching back to 1975, the Festival plays host to the music industry’s elite artists, ensembles and conductors.  With the backdrop and acoustics of the major patriarchal basilicas, art and music come together in a unique and timeless fashion. An annual event, music lovers and patrons converge from across Europe, the United States and other world-wide destinations to take part in the two week festival.

With a long and successful history of performance tours and competitions including the World Choir Games, Battle of the Choirs and the Australian National Choral Championships, conductor Philip Matthias is no stranger to the international stage.  With appearances in China, France, Korea, England and the United States, Matthias will now share the podium with the likes of Eberhard Metternich, Tomomi Nishimoto, and Leopold Hager.  “This is a great privilege, being able to perform in such an important event as this, one which we look forward to with much anticipation, including its impact to our community and University” says Dr. Matthias.

Established in 1995, the Newcastle University’s Chamber Choir includes students and staff of the University along with members of the wider community who share a love of singing and enjoy performing a challenging and varied repertoire.  Decorated on numerous occasions with top ranking awards and medals, ECHOLOGY has been featured ABC Radio, BBC Radio, national and international television, and has an extensive discography.  Due to its demanding schedule of international engagements, Echology is looking to expand its choral network, and is seeking expressions of interest for those who would like to join the choir for the festival in Rome, and similar events. For further details contact Phillippa.Miskiewicz@newcastle.edu.au. Ph 02 4921 5507. Rehearsals will be held from late July. ‘Singers need just a good choral tone and good music reading ability. Much of the learning will be done in singers own time, lessening the need for weekly rehearsals’, states Matthias.

According to Matthias, Echology is opening this extraordinary invitation to choristers from across Australia, and non-performers wishing to accompany the ensemble and experience the festival are welcome to join to touring group. In addition to the Festival Concerts in Rome, members of ECHOLOGY and friends will have opportunity to take in tours of Ancient Rome, the Sistine Chapel as well as visit and perform the St. Francis of Assisi Cathedral in Assisi.